Today’s interview actually comes from a friend of mine, Patricia. She has seen the show 28 times between the two tours and the Chicago production. Her first show was January 25, 2006 in Chicago with her most recent being November 22, 2009 on the 2nd National Tour. Enjoy the interview below!

Who is your favorite Elphaba and why?
Kristy Cates-it is said one always loves one’s first Elphaba, and I am no exception. Her singing is amazingly strong and her acting is so entertaining. She conveys mood so easily in her expressions and all of her body language.

Who is your favorite Glinda and why? 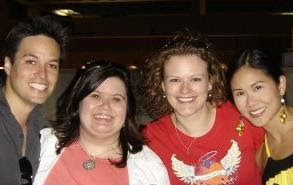 Stacie Morgain Lewis-she of course looks likes the perfect Glinda to me, being so petite and perfect, but one cannot ignore her beautiful singing and I always felt like she portrayed Glinda as someone who sincerely wanted to be good and was devastated to find it wasn’t as simple as it seemed.

Which Elphie/Glinda pair do you think has the best chemistry?
Kristy [Cates]/Stacie [Morgain Lewis] and Victoria [Matlock]/Christina [DeCicco].

Who are some standout understudies you have seen?
Zach Hanna as Boq, Donna Vivino before she was lead Elphaba, and Coleen Sexton as Elphaba.

Who is the nicest person you have met at the stagedoor?
I couldn’t choose one, I’ve had so many great experiences! Kristy Cates, Brad Weinstock, Jeremy Duvall, Steve Ewing, Summer Naomi Smart, and Cliffton and DeeDee Hall, and I’m sure several others I’m forgetting right now!

What was your favorite time seeing the show?
Probably the second time…I had seen it the first time in Chicago from the balcony and the next night we won front-row lotto seats and Kristy/Stacie up close just dazzled me!

Other than Wicked, what are some of your favorite shows?
I don’t live in a major theatre area, so I haven’t seen many of these, but I like Chess, Evita, Dirty Rotten Scoundrels, Nunsense, Joseph, The Marvelous Wonderettes, and my most recent CD purchase was Gutenberg! the Musical.

PHOTO: Patricia and a friend with Cliffton Hall & DeeDee Magno Hall. She is second from the left.

One Response to Fan Interview: Patricia