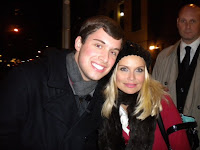 Today’s fan interview is from a friend of mine, Robert Robinson, who currently resides in New York to attend Marymount Manhattan College, studying Theatre Arts: Producing and Management. He is a native of Georgia and has seen the show seventeen times. Check it out below!

When was the first time you saw the show and what production?
January 6th, 2006, Broadway. It was Shoshana’s 2nd to last show and she was out for both shows that day, I got to expereince the Wicked curse. I saw Saycon as my first Elphaba.

When was the last time you saw the show and what production?
June 28th, 2009 on Tour in Memphis with the 2nd National tour. Marcie as Elphaba!

Who is your favorite Elphaba and why?
Eden Espinosa, always and forever. She has the best acting ability for the role I have seen and I am in love with her voice, and not to mention her riffs!

Who is your favorite Glinda and why?
Megan Hilty. I have never seen a funnier Glinda and someone who also makes the perfect transition into act 2.

Which Elphie/Glinda pair do you think has the best chemistry?
Eden Espinosa and Megan Hilty. You can’t even touch what they had and the real relationship they have in real life.

What other standouts have you seen in other principal roles? What about ensemble?
Sebastian Arcelus as Fiyero and Jenna Leigh Green as Nessarose. I have too many favorite ensemble members! I think the standouts were on the 1NT in fall 2008.

Who are some standout understudies you have seen?
Donna Vivino when she was the standby and Melissa Bohon as Glinda.
Who is the nicest person you have met at the stagedoor?
I cannot even choose one person. Some standouts are Eden Espinosa, Stephanie J. Block, Carmen Cusack, Megan Hilty, Jenna Leigh Green, Katie Rose Clarke, and Sebastian Arcelus.

What was your favorite time seeing the show?
Eden Espinosa’s last on Broadway (10/8/06). I have never been to a more emotional show before, and it was also Eden’s last show which was just perfect in every single way.

Other than Wicked, what are some of your favorite shows?
Spring Awakening, Next to Normal, Ragtime, Legally Blonde, The Wedding Singer, and Hair.

Which “Wicked” alumni/current cast member’s work outside of “Wicked” do you admire most?
Probably Shoshana Bean’s debut album and Kristin Chenoweth’s film and TV work.