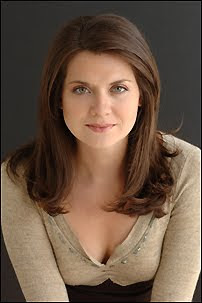 We are pleased to host an interview today with Broadway’s brand new Nessarose, Ms. Jenny Fellner. Ms. Fellner has previously starred in “Mamma Mia!” and “All Shook Up”. She offers some insight into performing as Nessarose below. We thank Jenny for kindly agreeing to this interview!

What was your first professional acting job, and how did you get it?
My first professional acting job was at a place called The Black Hills Playhouse, in Custer State Park, SD. It was literally a theatre in the woods, and we stayed in cabins. Once after a show the entire audience and crew couldn’t leave the theatre because there was a buffalo standing outside!!! I learned everything I know about acting and theatre from working there for five summers.

What is your favorite role that you’ve played, thus far?
Oooh…tough one! I like playing parts that differ from whatever I just got done playing. For instance, this summer I played Irving Berlin’s first wife, Dorothy, in Tin Pan Alley Rag. A sweet, fun-loving, tough cookie in a pink dress. Immediately after that I played Lizzie Borden, the supposed double-murderess. I enjoy it all.

We saw that you have toured with “All Shook Up” – what are the advantages and disadvantages of touring life?
There are so many of both! One advantage is that you don’t have to make your bed, clean your room, or buy toilet paper or wash your towels! A disadvantage is the burdens of constant air traveling. It’s dry on airplanes, the climate is always changing, airports have become much more difficult to get through, and for me I had my dog, so a lot of money and effort went into getting him around. We had such an amazing group of people on the All Shook Up tour, that it made the nine months on the road fly by! I look back and some of my fondest memories were on that tour.

Has it taken a lot of work to get adjusted to the wheelchair in rehearsals?
Much more so than I expected! I’m sore in weird places, and it’s difficult adjusting to the raked stage. It became so that just wheeling in a straight line was difficult! I think I’ve gotten the hang of it now, and actually have grown to love all my little wheelchairs, each in their own way!

How long have you been in rehearsal for the role? During your rehearsal period, do you rehearse all day, five days a week or just sporadically?
I’ve been in rehearsal since Tuesday, Dec. 29. Early on we rehearsed six days a week, but once I learned the role I’ve only gone in sporadically. I’ve been watching and trailing the show, which is a great help. Our two dance captains are absolutely amazing, and have happily given their time to help me in any way. I am endlessly appreciative for them!

From rehearsals, what is your favorite scene or song to perform?
Well, it’s tempting so say my big scene in Act II, the Governor’s Mansion, although that scene is also extremely emotional and painful! So I get to do the most in that scene, especially as far as singing goes, but part of me just loves wheeling around in Dancing Through Life, where everything’s happy!

How do you feel about your debut this week – excited, nervous, scared?
I feel all those things! Mostly excited I would say…and I love getting nervous! I am able to feed really well off of nerves, and in some ways it makes me focus even more. Just watching the show lately, has really made me excited to be a part of it.

Is there any other role in “Wicked” you could ever see yourself performing?
I used to think so…obviously there is so much wonderful material in both of the lead women’s roles, I spent time and effort trying to fit myself into one of them, all the while overlooking sweet little Nessarose! After all is said and done, this is the role that I fit, and I love every dimension of her. I will say this…I get a little bit jealous of Dr. Dillamond’s costume…

Outside of “Wicked”, what are some dream roles for you?
Well, ever since I was a little girl I always wanted to play Annie. It never happened, and I never got over it! There are so many good roles out there…I’d kill to play Eliza Doolittle in Pygmalion.

Have you ever seen/been involved in any funny onstage mishaps you’d like to share?
Once I was doing a play at the Irish Repertory Theatre. It was a Shaw play called The Devil’s Disciple, and as it was a period piece, the men wore these clip-on ponytails under their hats. I guess it was an accident waiting to happen…anyway, during the big courtroom scene one of the guys had to come running in and remove his hat. Well he came running in, took off his hat, and the ponytail flew off and landed in the middle of the courtroom. It was one of the funniest things I’ve ever seen, and IMPOSSIBLE to stop laughing!

This entry was posted in Exclusive Interviews and tagged Broadway Production, Jenny Fellner. Bookmark the permalink.