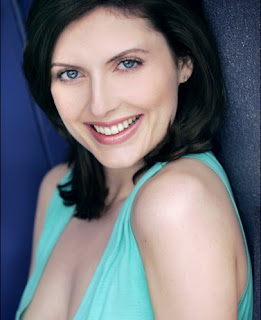 Today, we have an exclusive interview from Ms. Cristin Boyle, former ensemble member and understudy for Glinda in Chicago. If you saw the show with her in the ensemble, you would have heard her singing, “I hear some rebel animals are giving her food and shelter!” in “Thank Goodness”. Check out this amazing interview below!

My first professional acting job was the in the ensemble for the Merry-Go-Round Playhouse’s 2000 summer season. We did Evita, My Fair Lady, and Gypsy. It was the first professional audition I ever attended. I was too scared to go out and audition for summer stock when I was going to NYU. Sometimes when you are in school and you are constantly confronted with your own weaknesses, you forget that that doesn’t mean you are a talentless, un-hireable disaster. So my sister shoved a copy of the Theatrical Index at me and told me to get over myself and two weeks later I walked into Merry-Go-Round’s ensemble open call. I sang sixteen bars of “I Feel Pretty” and was called back. At the call back they asked me how high I sang and I said “high.” They laughed. I was very green. I quickly became an audition junkie. I loved it.

My favorite jobs? Hard question. I think my favorite job would be doing The Game, a new musical version of Dangerous Liasons, at the Barrington Stage Company. It was a dream come true for me – one year out of school, working with Broadway veterans in the Berkshires on a new musical. The writers were in the room and custom tailored our dialogue and lyrics based on what we brought to the characters. The costumes were designed and built for us. I got to play Cecile (Uma Thurman’s character in the Glenn Close version) It was an exciting environment to be in.

I auditioned for Wicked and the Glinda cover four times. The first was in the fall of 2003 before the show opened on Broadway for a last minute cover. I thought they were crazy for calling me in since I am 5’6″ and brunette and Kristen is 4’11” and blonde. I got called again in the winter of 2005, but I was in Kansas City opening another show. In the fall of 2006 I was called in so the casting office could re – familiarize themselves with who they had in their Glinda files. After that I went in a month later for a spot, didn’t get it, and then got called in in January of 2007. I went in on a Thursday or Friday, got called back on a Tuesday, got the job Tuesday evening and flew out to Chicago the next Monday. That’s how slow and fast it is sometimes.

I had never stepped into an already running show and had never understudied before so I was intimidated. I didn’t want to let anyone down or drastically change other actors’ shows. The rehearsal process was fast. I learned the ensemble music and blocking in ten hours. I would go down to the rehearsal room and turn the monitor on during the show and do the show with the cast, but of course with no one else and just the tape on the floor for guidance. I really couldn’t wait to go on. I learned quickly that that was the only way I would really learn my part – by just doing it. The Glinda material took multiple private rehearsals with the stage manager and the dance captain, and then understudy rehearsal with the other understudies.

I was very nervous for my first show. I kept thinking “Why am I so nervous? No one is looking at me in the ensemble.” But that doesn’t matter. And sometimes they are looking. You don’t get to do the show in costume, with blinding lights, with sound and microphones, with fog, with bodies and full cast and crew until it is showtime! You have a bare bones put in – no lights, sound, or audience. And of course you don’t want to mess up. I totally ran into people. I felt like a stranger – like I didn’t belong. And I felt I was possibly fired. And then at the end of the night, one of the guys saw me and said, “Oh I forgot you were in tonight! You just slipped right in, didn’t you?” It is amazing what you can feel on the inside and clearly not betray on the outside. Needless to say, I had a bunch of notes from the dance captain. He was kind.

I mentioned the rehearsing for Glinda earlier. As for the first performance… it felt surreal. Like I was watching myself from the outside. I wasn’t really looking at other actors on stage. I just wanted to stand where I should and say and sing the right words. And maybe make people laugh, which can be hard at a thinly populated Wednesday matinee in February in Chicago. I recall Rondi Reed after asking how it felt and before I could respond, she said “Disembodied right?” Yes, that was it exactly.

My favorite scene in the ensemble might have been the opening. So much singing and crazy mob emotions, and I got to interact with so many other cast members on the stage. And I got to hit the Fiyero u/s with the ribbon. That was fun. As Glinda I had two favorite scenes. I LOVED the train station scene. Just really great dialogue. I also loved the final scene between Glinda and Elphaba. One of the best and most innocent qualities of Glinda (I have always thought) is that she truly thinks that she can just, poof, make things better and everything is fixed. In that last scene, Glinda truly grows up and takes on responsibility. It was also fun to say “Let the little girl go and that poor little dog, Dodo!”

As for which is more exhausting, I really can’t make the comparison – I don’t think I ever got to that real comfort zone with Glinda like I got with my ensemble track. I don’t think I ever had that sense of abandonment and relaxation that I achieved in the ensemble. Either way, though, eight shows a week can start to wear you down. I thought I would never take a sick day. Boy, was I was wrong.

Yeah, it is hard to go to sleep immediately after doing a show. So you go to bed later, and thus wake up later. I find you need a bit of extra sleep when doing a show – mostly to rest your voice and body. I had a routine. It was my own and it worked for me. I had stuff I did when I wasn’t at the theater. A lot of my day revolved around scheduled dog walks and when I needed to be at the theater. And then we were at the theater six days a week. Sunday night was the beginning of the weekend and Monday was get stuff done/play day. Can you imagine a world where Mondays are the best day of the week? It does indeed exist.

Advice… hmmm… As for my own advice, I would say, if you are going to go for it, go for it! Don’t hold back or do it half way. Don’t let anything or anyone bring you down – you have to be resilient and believe in yourself! Don’t let your survival job take over your auditioning. Work really, insanely hard, and in the right way. There are a lot of things you can do that seem like work but it is really busy work. You can show up for auditions – and as Woody Allen says, 80% is just showing up – but if you aren’t also working on your craft, you will have nothing to show for in the audition room. Acting, performing, auditioning – it is all just doing your homework in front of people. I think the most successful actors are always working to refine their talents. I don’t know if there is ever a point of perfection, but there can always be the action of working through something and finding deeper meaning and connection with the material. That, at least, has always kept me grounded on stage and in the audition room.

On a final note, acting can be considered a selfish profession, and at times, as an actor you have to focus on yourself to do your job. But I would also argue that it is selfless. Actors are constantly giving of themselves to others, and I think that is one reason why the theater community one of the most generous and welcoming communities out there. If you decided to join the acting community, you really couldn’t surround yourself with a finer group of caring and creative people.

We thank Ms. Boyle for contributing this wonderful interview to the blog!

This entry was posted in Exclusive Interviews and tagged Cristin Boyle. Bookmark the permalink.