Jessica, who has seen the show twelve times between three productions (Broadway, Chicago, 1st National Tour) has agreed to join us for a fan interview. She is from Iowa and first saw the show on February 18, 2004 on Broadway and last saw the show on April 5, 2009 on Broadway. Check out her very well thought out interview below!

Who is your favorite Elphaba and why?

It’s a tie between Idina Menzel and Lisa Brescia. Idina is the embodiment of Elphaba to me. The voice, awkwardness, vulnerability, and fierceness add up to near perfection. Lisa’s Elphaba is the one that touched my heart the most because she brought so much depth and light to the character. If I had to choose just one, I’d choose Idina,

Who is your favorite Glinda and why? 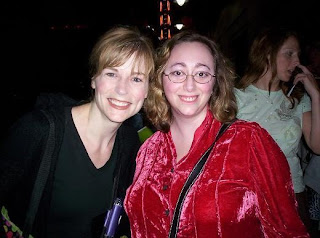 h. She is the embodiment of Glinda to me.

Which Elphie/Glinda pair do you think has the best chemistry?

Idina and Kristin by a landslide. Their chemistry was the most magical thing I’ve witnessed in Wicked.

What other standouts have you seen in other principal roles? What about ensemble?

Katie Rose Clarke is the best Glinda I’ve seen in terms of acting. She’s so gifted. I had the pleasure of seeing the full OBC and they were all incredible and are still my favorite cast. Some others are Kate Reinders as Glinda, Rondi Reed and Alma Cuervo as Madame Morrible, Lenny Wolpe and Lee Wilkof as the Wizard, Deedee Magno Hall and Jenna Leigh Green as Nessarose. Some ensemble members who stood out are Kathy Deitch, Sara Jean Ford, Celisse Henderson, and Cristin Boyle.

Who are some standout understudies you have seen?

Laura Bell Bundy as Glinda; Lisa Brescia, Eden Espinosa (even though I only her her in Act 2) as Elphaba.

Who is the nicest person you have met at the stagedoor?

They were all gracious, but Lisa Brescia really stood out to me because she seemed more genuinely appreciative than anyone else. Her kindness meant so much to me.

What was your favorite time seeing the show?

My first time. Everything was fresh and new to me.

Other than Wicked, what are some of your favorite shows?

next to normal, The Light in the Piazza, Hairspray.

Which “Wicked” alumni/current cast member’s work outside of “Wicked” do you admire most?

Idina Menzel. I love her three CDs, I’ve been to two of her concerts, and I think she’s an excellent songwriter.

PHOTO: Jessica with Lisa Brescia (Elphaba in Chicago; s/b for Elphaba on Broadway)