– There have been three different designs for the Bubble Dress: the original (such as what Kristin Chenoweth wore), which had a less sequined top and a flatter bottom; the second one (designed as a more flattering approach for Glindas who were not as small; the bottom puffed out more and the top was more curvy); and the latest one, which was very similar to number two, except the bottom puffed out even more and the bottom was made out of an even shinier material. The three designs are shown right here, in order: 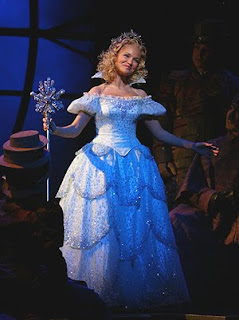 – The actress playing Glinda wears her shoes for the Shiz scenes while in the opening of the show because she has to change clothes & wig in thirty seconds for the next scene.

– The other costumes have also had changes throughout the run, though none as significant as the bubble dress.

– The Glinda wig for shiz was originally straight, but then they changed it to curly, and now they have once again returned to straight, though it has a different twist to it now. Pictures are below: